This service is available in paid version only
The Self

This is not a new archetype, but is identical to Jung's "Das Selbst" – the self. This archetype gives the Circle of Being archetype a new dimension in which every person longing for unity will be able to find himself and guide his individuality towards unity. The discoverer and pioneer of the Self archetype, Jung was fascinated by symbols that lined his route to the unconscious, and perhaps that is why he did not notice many of the archetype's inconspicuous features. He considered paradise, the Golden Olympic Age, hermaphrodite or the mythological cosmic egg from which all creation emerged to be symbols of wholeness. Jung also included mandalas of Eastern religions among the symbols and later even UFOs. I do not completely agree with the views of the distinguished psychologist who joined several archetypes into one, but essentially his opinions on wholeness are correct. Jung did not stop at "mere" symbols, but also tried to find in the archetype of wholeness the primal human being in the purest state, such as Adam, Christ or Buddha. He tried to show people the image of God in the human soul that (according to Jung) appears completely independent of belief or disbelief in God.

The appearance of the Self archetype in human consciousness is rare or even impossible in terms of the depth of the average person. Yet in the true desire for peace and tranquility, in a sincere attempt at self-improvement and especially after entering the Circle of the Renewal Process, the magnificent breadth of the archetype spreads out before a person following the first indications. I would call this archetype the "Ambassador of God." Before the final understanding of God, this ambassador must slowly, step by step, clarify the state of being, possibilities, the path, purification, place and threat of instincts and the karmic model of conduct so that it prepares truth seekers to ultimately become new ambassadors who will acquaint others with the process of understanding wholeness. The Self archetype is a "gift from God" to which a person has to approach in order to receive it, for God honors his free choice and will not impose anything by force.

I have created from my experiences a scheme for the archetype that was comprehensible to me only when I ceased to view the archetype from the perspective of an individual and began to look at from it within – from the center of my being. It should be pointed out in the introduction that the archetype uses all means necessary for the seeker to proceed, and fully understands that nobody goes down the spiritual path without wavering and without unnecessary diversions. It is therefore understandable that the archetype works entirely according to a person's inner predisposition.

The scheme for the Self archetype (from the perspective of the transpersonal self):

1. State of being
2. Possibilities
3. The path on which the following must be understood:      a) Karma
b) Instinctual model of behavior
c) Transience and antitheses
d) Forgiveness
e) Proper conduct and purification

The Self archetype uses these means of expression for instruction:

Perhaps many of you will say: "It's is all quite plain and simple. This archetype would not take many years to be mastered; just a few months or even days." But beware! It is not enough to merely acknowledge a truth (e.g. the existence of karma) intellectually; you have to accept it with all your heart, in which there can be no contradictions and misunderstandings. It can therefore take many years from an intellectual acceptance of a certain truth before you are able to accept it with your essence and dispel the clouds of doubt within. I am speaking from my own experience. Many will also feel the desire for the inclusion of the "ideal of the being's center" – of a higher transpersonal self (of a temple, an edifice) in this archetype. Yet I have I must disappoint: the idea of a being's center is merely an idea and therefore clearly belongs to a circle "below" – to the Treasure archetype in the Circle of the Renewal Process. You will find a more detailed explanation of the individual points of the archetype's scheme in the comments on the individual dreams (see contents of references below).

The Self archetype has a deep relationship to philosophy, spiritual science and, particularly, to meditation. After successful meditation and a conscious touch within, the surface of the (not only) Self archetype is stirred up and the attempt at finding the truth is crowned by partial successes in the form of images of God's ambassadors, images that slowly emerge from the inner depths. The deeper we get in meditation, the deeper the truth will come to meet us. If you attempt the influence of meditation on the Self archetype and then follow your dreams, you will be amazed by how much wisdom and often even heavenly bliss is concealed within each person. You will be amazed by the infinity that shines in a single infinitesimal point and amazed at the beauty of a human being.

Not only on the path through the Self archetype must the most important relationship of all be the relationship to the inner self. You must acknowledge and love it. Only then will you be able to fully and automatically acknowledge and love others. One's self is blessed, as is the self of all others that come into contact with you everyday and try your tolerance, patience and love. Buddhists try to see in the other person, no matter how evil, a Buddha in disguise; the Christians try to see Christ. This simple precept can significantly help you on the path to unity, on the path to understanding the Self archetype in a wholeness composed of the consciousness and unconscious.

The Self archetype is immense inner wealth that shines like a diamond in the human unconscious. It enables us to head toward the source of love and wisdom and to exceed the circle of birth and death. Perhaps it is paradoxical that we head toward unity through compromise, for a person on his way through the archetype to the culmination of his existence in the transpersonal self must take two spiritual paths – a short and long one. The short path is too fast since it does not take into account the ego. Frequent thoughts of God and divine nature strengthen a positive state of mind, freeing a person from his egoism; when the mind is in a released state, the unconscious stores the right ideas into his subconscious mind. In faith and in love for God or in devotion to another, divine reality, the ego dissolves and, in not existing, allows a person to understand his own divine essence. Various exercises that penetrate the veil of ignorance and directly seek the original essence of being also belong to the short path. Many of them are described in this archetype and in other archetypes of the Circle of Being (Attentiveness, Wise Old Man). Since I briefly explained the short path, I must also explain the long path. The long-path teaches a person to think properly, teaches discipline and self-control. This path takes into account the existence of the ego, which is why a person on the long path focuses on moral refinement, purification, prayer, repentance, meditation and mental, breathing and physical exercises. The long path is a ceaseless struggle with one's own nature. Many think that knowledge can be achieved by either taking just the short or just the long path. This is not so! Knowledge can only be achieved by combining both paths, and a clear example of this is the Self archetype, which combines experiences of both paths. If you achieve perfection on the long path, you still have to overcome the ego. Self-control becomes dominant on the long path, which, on the other hand, suppresses many unrecognized inner factors. It is therefore extremely important to recognize the moment in which self-control begins to hinder development and, at that moment, to prioritize the short path. How? Perhaps by becoming aware of and fully absorbing into the consciousness the simple faith that will take you over the last hurdle. Only the belief that the highest objective actually exists and that it is even within each person equates it with a divine essence without visions, images, notions and ideas.

The Self archetype greatly contributes to the wholeness of a person and only a whole person becomes the master of his own existence in which he combines all qualities and all four elements (earth, fire, water, air) within himself. Wisdom and understanding comes from this union and shines to the fool and sage in a single body. Then the person awakens and, without thinking, sees from the peak of enlightenment that reality is woven from the same material as a human dream and finds the only eternal source, around which everything else revolves. The source as pure pulsating energy is in everyone and is prepared to give him everything. We do not even have to go anywhere and look for it or even bow and scrape. The only thing we have to do to find it is turn our attention inward. Then we learn how intuition, inspiration, strength and consciousness arise, and that here we can find the sweetest rest.

The archetype culminates in crossing this final border between the circles of the unconscious and the entrance to the transpersonal self, which is nothing other than self-realization. Needed for self-realization is a mystical death in which one leaves his earthly existence "on the cross" and, freed of his onerous identification with the ego, rises from the ashes of his own mystical death to a new life. 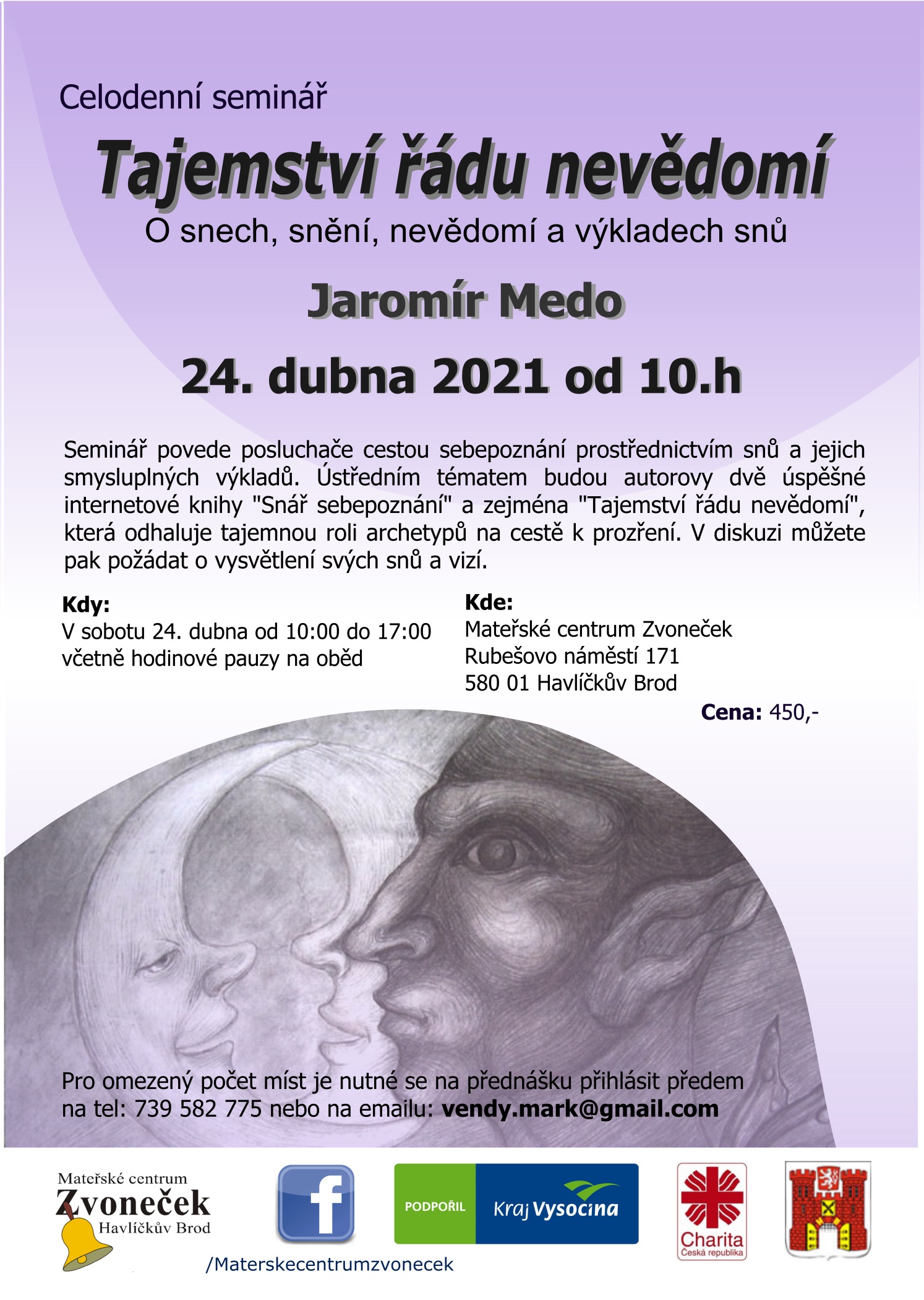